Learning the Law of Value with Table 301

Gina Boulware is a busy woman. During our 45-minute chat in the empty front section of Soby’s, the Director of Marketing and Public Relations at Table 301 received over 20 text messages. One of those was from the manager at the newly revamped Table 301 Catering and Kitchen (formerly known as Soby’s on the Side) who was apologizing for replying a little later than intended. But the manager’s reason for being late with the information perfectly summed up the #1 core value and mission of Table 301 — she was making sure a special guest from out of town, who was having breakfast at the Kitchen, was having the best possible experience. Needless to say, Boulware was more than okay with the delay.

Boulware has worked with Table 301 since 2003, when the Greenville restaurant group consisted of just two restaurants, Soby’s and Soby’s on the Side, with only 30-40 employees. Since that time, Table 301 has expanded to include 9 concepts within a 3 block radius of Downtown Greenville (plus the newly opened Southern Pressed Juicery in Austin, Texas). They have over 40 employees at the managerial level alone and employ over 500 people total.

We wanted to know the secret behind Table 301’s success so we sat down with Boulware, who has partnered with us on eight web design projects (and counting) to get her take.

The Law of Value

The business philosophy book The Go Giver had a major impact on Table 301’s founder and president Carl Sobocinski, and one of its “Five Laws of Stratospheric Success” has become the mantra at all of Table 301’s restaurants:

Give more in value than you take in payment.

At each month’s managerial meeting, “law of value moments” are shared with the full team. Moments like:

This “extra mile” mentality is the central tenant of the Table 301 culture. As Sobocinski has stated, he wants guests at their restaurants or catered events to feel like they’re on “a two-hour vacation.” In other words, create an atmosphere where they can check their lives at the door and allow someone to take care of them for a little while.

As Boulware stated, “There’s a really fine line between doing things because you want to do them and doing them for the benefit it may bring you. When that mentality is at the core of your culture, people can tell. While this experience may not happen for every person at every restaurant every time, it is definitely the goal.” 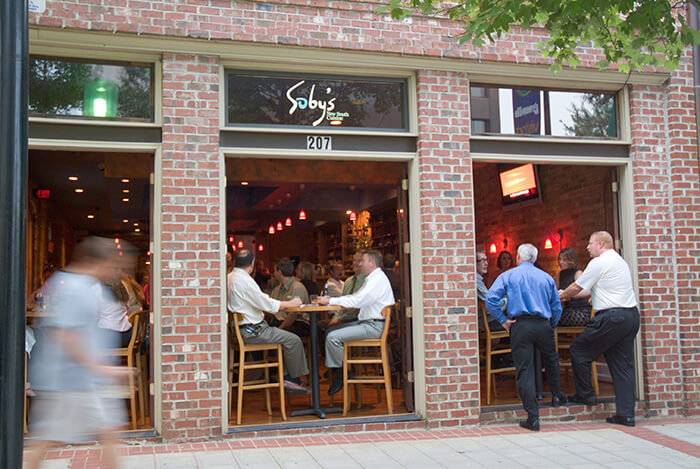 Boulware firmly believes the success of Table 301 can be attributed to the company’s deep ties to the community. They have been in the midst of Greenville’s growth, opening Soby’s in the heart of Main Street in 1998 when very few people ventured further than a block south of the Hyatt. (Back then, they used to close Soby’s the week between Christmas and New Years, and the week of July 4th. Now, with downtown being a year-round hot spot, those are some of the busiest times of the year.)

They receive requests regularly to open “a Soby’s” in spaces all over the region, but firmly believe that Soby’s is what it is because of the community it’s in. They are a Greenville company, through and through.

As a result, Table 301 loves being part of city-wide events such as Euphoria (which Sobocinski co-founded with Edwin McCain in 2006), Fall for Greenville, and the TD Market. As a company, they also lend support in a variety of ways to the March of Dimes. In 2011 they even hired a Director of Sales and Community Outreach, Kim Eades, to manage corporate participation and community relationships around town.

Their passion for community involvement and service trickles throughout the entire company, with employees participating in organizations as varied as the South Carolina Restaurant and Lodging Association, the Greenville Police Foundation, the Greenville Housing Fund, the United Way, the Visit Greenville SC board, and on and on. There are even several folks who mentor kids at the Frazee Center. This all reinforces the idea that the “Law of Value” permeates the culture at Table 301 — the expectation is to provide value not just to their customers, but to their community.

Our mission at Engenius is to bring success to our clients, but that’s intimately tied to our dedication to providing benefit to our community, much like Table 301’s dedication to their diners. Our relationship with Table 301 embodies the goal we set out to achieve every single day — to help businesses and organizations that make Greenville such a great place to work and live. We’re thankful for what Gina and her team contribute to the area, and we relish the opportunity to assist in making their vision a reality.